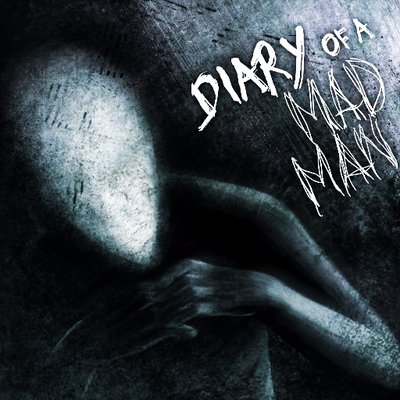 Do you really think your free? Sure you’re free to chose what movie you want to watch in the comfort of your own home. You can choose what to put in that pie hole you call a mouth as you waste away in front of your high definition master, but you’re not really free. You still answer to that one father, and it turns out he couldn’t give a shit about anyone but himself.

Not me my friend. I killed mine …

This story is chock full of trigger warnings such as bad language, violence, and murder. This story is a vehicle to highlight the many social issues such as domestic abuse, depression, and suicide that are prevalent in our society.

If you are dealing with any of the problems highlighted in this story, or know someone that is, then please either call the police emergency number if you’re in immediate danger, or your local police if not; they will be able to get you the help you need.

DIARY OF A MADMAN

It didn’t take me long to find him … my father. He was exactly where I figured he’d be. All alone in the bottom of a bottle, still licking his long healed wounds as if they were fresh. As if he was the one wronged, as if he was the victim. Seems using the booze as a crutch is a common trait in my family. Well that and the love of hurting people. To be honest, I probably did him a favour. Thinking back, I should have left him to his slow and painful demise at the hands of the bottle, but then I wouldn’t have found the closure I needed … and I definitely wouldn’t be where I am today.

Not sure if it was the booze or guilt, probably both; but he pretty much put his own head in that noose. By the time he realised what was happening, it was too late, I’d already kicked the chair from under him. I was a little shocked at how calm I was as I watched him struggle. His body thrashed about and then finally went limp. I must admit, at the time, I felt sorry for him, if only for a minute. Here was a man that had thrown his life away, years ago, when he decided he would be a shitty parent and an asshole to those closest to him. To those who put their trust in him.

Fuck him! He got what he deserved!

It took me longer to pluck up the courage to face him. Always finding an excuse to put it off. Telling myself, “It’s the wrong thing to do”, “I’ll be just as bad as him”, or “Two wrongs don’t make a right”. “I’ll be the better man.” But the urge would never leave, and none of these bullshit excuses helped. They were always there, eating away at the back of my mind. One minute I would be enjoying a run, or dinner, or a beer down the pub. The next I would be cloaked in a red mist, hell bent on ripping apart the next person who came across my path.

Originally the idea was, I would just smash him in the face, offload all that pent up aggression and teach him a lesson of a lifetime, the same lesson he’d been teaching me for years. Maybe if I had just gone and done it, right there and then, that would’ve been the end of it. But with each passing day, week, month … my anger had slowly brewed into something stronger, something more volatile. It had become … a hatred beyond anything I could’ve imagined. Three year’s worth of blaming him for the death of my mother; a simple punch in the face wasn’t going to cover it, not by a long shot! Nothing short of his death would quench the fire that burned within me.

I’d even tried to forgive him. Anything to end the hatred that consumed me, but in the end, there was only ever going to be one answer.

(BUILD INTO A STATE OF BLISS)

The peace I found after his death was beautiful … while it lasted. My head was as clear, and as crisp as the air on a frosty December morning. I truly felt alive! Like my whole life had been playing catch up with the rest of the world, but now we were on the same page, at the same time, in perfect harmony.

The dawn chorus played ‘my’ tune as I walked the streets in the small hours. A tune long forgotten, now remembered in that perfect moment. The song that created the universe, that sustains it. That is interwoven into its very fabric. A gentle breeze guided me around the town. Passed the old family home where I grew up. Past my grandparents, the only place I was ever truly happy, and finally, home.

The sun broke the horizon and gave me a subtle wink as I turned the handle to my flat and entered.

My bed felt softer than ever before.

The bottle of single malt on the nightstand … raising a glass … tipping its hat to me for a job well done.

I was effortlessly gliding from note to note on the song of the universe as Bog was playing them.

I had never slept that well before.

The banging on my door a few hours later sent me plummeting to the ground.

I wasn’t prepared for that. In that instant I was quite happy to hold out my hands to the handcuffs of the first cop who happened by. It was obvious to me that the first place the police would go would be to friends and relatives. Years of lying on a sofa watching hour after hour of CSI in a drug and booze induced funk had taught me that much.

And who said there was nothing productive about watching the telly?

Imagine my surprise to find the guy from the next door all up in my face, shouting his mouth off about how I kept him up again all night. Blaming my drunken stupor.

Within a few minutes my willingness to hand myself in had disappeared, as had the roof over my head. Turned out my neighbour had laid it on thick with the manager, and I was out on my ear looking for a new place to lay my hat.

Got some new ink for half term! What adventures are you about to undertake?
Transported across the Vast Ocean by a winged beast back to the Old World a signed hardback of #thechildofchaos by @glendahlgren
#longtimenoread #oldfavourite #iamreading #thebookoffiverings
A brand new ‘In a Word…’ post on the site (link in bio)
Took a break from renovating and spotted this #butterfly on a #daisy
#newpost Author @paulsating celebrates the launch of his new #urbanfantasy novel ‘Bitter Aries’ with us at betaworlds.net
Loading Comments...
%d bloggers like this: